Everything you need to know about Facebook’s algorithm in 2020

Today, on february 4th, Facebook celebrates 16 years since it was created by Mark Zuckerberg. Even though its common sense that this social network has a huge dimension, do we really know how much influence it has on the world? On december 2019, Facebook had more than 2.5 million active users per month, with 1.66 million people joining this network everyday and being consider daily active users.

These statistics only show a tiny little part of what Facebook actually is. Many people use it, but they don’t even know all of its functionalities. However, and keeping companies in mind, knowing all of those functionalities and keeping track of them may become a competitive advantage that will facilitate the arrival of content to the audience.

Even though it isn’t the only key factor that influences this process, Facebook’s algorithm holds a huge responsibility by determining which posts each person sees and in which order, every time they open their news feed. Usually, many people resist the constant changes on the algorithm, but the truth is: it’s the algorithm that allows us to deliever content that is actually meaningful and valuable to users.

This has been Facebook’s main priority, until 2020. With all the controversy around data privacy, Mark Zuckerberg and its team’s priorities had to change, and they’re are now focused on creating a more transparent platform, where users have more control of what they see. Nowadays, the focus is to create “meaningful interactions”, giving priority to our friend’s content instead of advertiser’s content.

Facebook’s efforts to create a more transparent platform started in 2019, with the introduction of the button “Why am I seeing this?” and with the promotion of questions sent directly to users asking them about their preferences. Both initiatives allowed Facebook to update its algorithm according to the patterns they managed to obtain.

But, in reality, how does Facebook’s algorithm work in 2020? It sorts posts according to the ones they consider that the user will be more likely to enjoy, based on multiple factors, like classification signs. These signs reflect a combination between the user’s behaviour in the past and every other people’s behaviour on the platform. Basically, there are 4 factors to keep in mind:

1. The inventory of all posts available to present to the user

This inventory includes all the possible posts to show up on a user’s news feed. These include not only posts of our friends, but also of advertisers.

The signals are all the information that Facebook collects about a certain content. This is where advertisers have the opportunity to shine, since this is the only factor they can control. To sum up, if you want organic results, you need to produce content that is really valuable to your audience.

3. The predictions of how a user is going to interact with a post

Based on their behaviour historical, Facebook predicts how users are going to behave in the future and if they’ll interact positively with a certain content.

4. A final score assigned to the content based on the previous factors 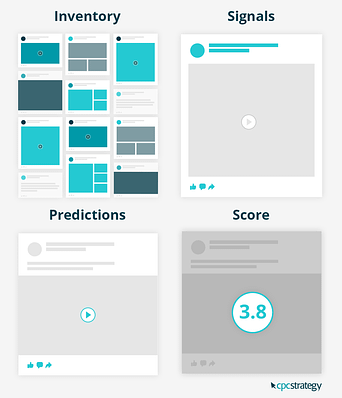 How Facebook's algorithm works by Tinuiti

All the previous process might seem a bit complex, which uncovers the big question: how can advertisers win organic results – without having to invest millions of euros on paid ads? Just like we’ve seen, the answer is content. So, Flybizz gathered 4 of the best practices for advertisers do adopt on Facebook:

WE ARE A DISTANCE EMAIL. WHENEVER YOU NEED TO CLAIM ANY QUESTIONS OR QUESTIONS USE THE MESSAGE FORM TO CONTACT US.